Never will I forget the sunny day in March, many years ago, when the paediatrician announced: “Your son has a serious, malignant, incurable muscle disease.” He looked at me cautiously, as if waiting for a reaction. A sign that I understood what he had just said.

But there was nothing. My head was fuzzy.

l sat there numb and had no idea how to start getting my head around this word. I just couldn’t grasp it. But two thoughts crossed my mind.

Was this man off his head giving me such a terrifying diagnosis after watching my son stand up just once? At the same time the thought came: of course, he’s right, and I knew it!

Despite all the reassurance from doctors, physiotherapists and other people, I had always suspected that something was wrong. If I were not so shocked, I might have felt a fleeting sense of satisfaction. Finally, I was no longer the neurotic mother who was always imagining things.

Why my child?
A dark time followed that fateful March day. For days I felt like I was in freefall. Not once was I able to remember the words ‘muscular dystrophy’, because my consciousness refused to accept this diagnosis. All I could think about was that my barely five-year-old, innocent, blonde, curly-haired boy would die of this disease. That thought ripped my heart out.

Why my child? As hard as it was, I kept asking myself the same question. I quarrelled with God and the world – especially with God. What had I done to deserve this? What had my child done? I looked for answers in religion, read books on coping strategies, and looked for advice from other parents of ‘special’ children, gradually learning to give up meaningless and difficult questions.

I decided that, despite this devastating diagnosis, we would have a good life.

Naturally, my little boy did not suspect what was going on, and his older sister went about her life. That was maybe my salvation: I was forced to carry on as normally as possible. After a few weeks this hard time ended and I began to deal with the illness. I spoke to the nursery, primary school, friends and neighbours. I turned to the church, and I researched self-help groups. Sometimes I had to swallow a lot, but the more I talked about the disease the easier it became for me. I decided that we would have a good life despite this devastating diagnosis. The idea of life expectancy faded into the background and disappeared for many years. I stopped searching for research and concentrated on life instead.

Important decisions had to be made again and again. Which school is suitable? How would he get on there? Does he need a teaching assistant, or could he manage without? How will I deal with the topic of school trips? Will he be bullied? Should he take steroids or not? How can I tell him why he is so different from his friends? How do I find the right words? When will he need a wheelchair? How can we deal with the situation as a family? Will I be able to do justice to his sister? Many sleepless nights came and went, and it was always my son who gave me courage and strength.

Naturally our life was very different to those of our family, neighbours and friends, simply because we thought differently.

Completely and naturally, he accepted his fate
My son went to the only local primary school along with his friends, unfortunately on a hill. Sending him to the nearest special school would certainly have made many things easier, but I didn’t feel he belonged to that world yet. The children in his class were totally at ease with him and the school went out of their way to make school trips manageable. He felt fine, was almost always in good spirits and carried on like a normal person. The moments when he was sad or stressed were rare and never lasted long.

As he got older he started to think about his situation. He kept his thoughts to himself. Textbooks say you should only answer the questions your child asks. But he did not ask questions. He seemed to sort things out on his own. Without any fuss, he just seemed to accept his fate. I was worried because for a long time I thought he needed to know what was the matter with him. But I found out many years later that he had in fact known for a long time, but just didn’t talk about it. Still, I felt it was time to put my son in touch with other children with Duchenne. So, in the hot summer of the football world championship in Germany, we drove to a rehabilitation clinic in Weserbergland for the first time.

I was surprised to discover how relaxed and happy the mood was between the parents and children; even families with older boys were having fun. I was even more surprised that we became part of a big family. To this day, our rehabilitation stays in Hoxter are highlights of the year.

His illness always gave me the time to grow into it and keep up
And so the years went by. There were several surgeries and long hospital stays. The need for financial assistance steadily increased, there were many battles with health insurance, and there was always the ongoing worry about his health, his muscle loss and loss of function, ventilation and heart medication.

I watched his playmates progressing while he went backwards, and that hurt a lot. On the other hand, I learned to live in the present – a skill I had always wanted. His illness always gave me the time to grow into it and keep up. I grew into it and made my peace with Duchenne.

Today my son is a smart, polite and, above all, compassionate person who always makes me laugh with his dry humour. He is a gift: my wonderful Duchenne son! 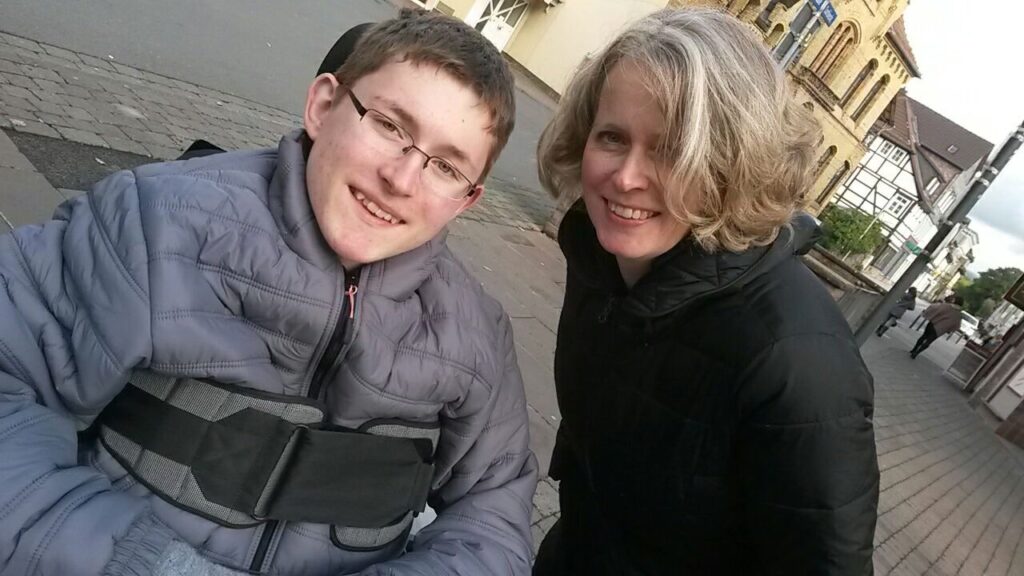 How a mother recognised the signs of DMD

Some of the common signs of DMD – such as developmental delay, walking with an unusual gait, and being unable to keep up physically with children of a similar age – are not always easy to identify.

This animated video explains what these symptoms may look like in day-to-day life, and why recognising them as early as possible is so important.

Information on postural management and stretches for people with DMD

Everything you want to know about DMD in one place

You are now leaving Duchenne and you, a website provided by PTC Therapeutics. This link will take you to a website to which our Privacy Statement and our Terms and Conditions do not apply.