What is dystrophin and why is it important?

In DMD, a gene change (mutation) prevents the body from producing enough of a protein called dystrophin.1–3 Dystrophin acts as a shock absorber or stabiliser for muscles.4 If the body does not have enough dystrophin, muscle cells become more sensitive to damage and deteriorate over time.3 The injured muscles are gradually replaced with fat and scar tissue, with the resulting loss of muscle leading to the symptoms of DMD.1–3,5

What causes the lack of dystrophin in Duchenne muscular dystrophy?

DMD is a genetic disorder, which means that it is caused by changes (mutations) in a certain gene.1,2 Genes are made up of DNA, a code that tells the cells in our body how to make proteins. Proteins are the building blocks of our bodies, and they are needed to make and replace cells. In DMD, the dystrophin gene is altered, meaning the body cannot make dystrophin.6 Without dystrophin, muscle cells are easily damaged.2,5 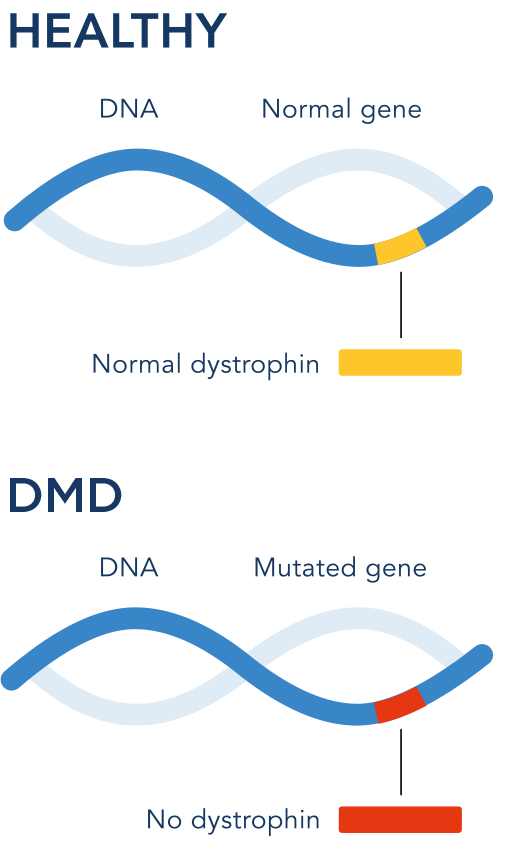 Most cases of DMD are caused when large pieces of the dystrophin gene are lost or deleted (‘deletion’).5,7

Less often, large pieces of the dystrophin gene are copied or duplicated (‘duplication’).5,7

DMD can also be caused by small changes to the DNA code (‘small alteration’).5,7

Although most therapeutic strategies can be used regardless of the genetic alteration, in some cases treatment for a specific type of alteration may be available.7 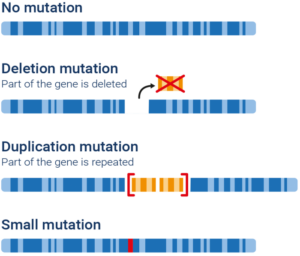 What causes the gene mutations in Duchenne muscular dystrophy?

The alteration in the gene that codes for dystrophin can be either:8,9

Spontaneous mutations mean that sometimes DMD can occur without any family history of the disease. These new mutations can also be passed on to the next generation.8,9

The dystrophin gene is the largest known human gene, which means that it is at more risk of spontaneous mutations than smaller genes.1

These new mutations can arise in a mother’s egg cell in two ways:

Any baby that is born in these situations will carry the altered dystrophin gene and also pass it on to any biological children they have in the future.8,9

However, it’s important to remember people have no choice in the genetic conditions that are passed on in a family. Nobody did anything wrong to cause DMD, so there is no reason to blame yourself or others.

How is Duchenne muscular dystrophy inherited?

Each cell in the human body has 23 pairs of chromosomes (long threads of DNA) in the nucleus. One of these pairs carries genes that determine whether a person is male or female:

DMD is known as an ‘X-linked’ disease, which means that the gene causing the disorder is located on the X chromosome:10 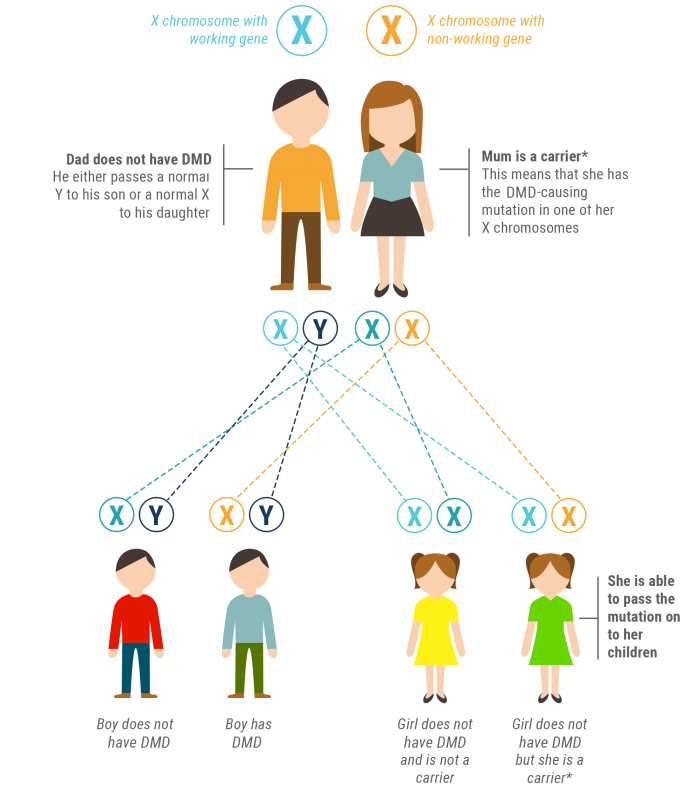 While the chances of having a female baby being born with DMD are extremely low – approximately 1 in 50 million – it can happen.12

A male with DMD can never pass the condition on to his son.10

What does being a Duchenne muscular dystrophy carrier mean for a female?

Normally, females who carry the DMD-causing gene produce enough dystrophin and do not show symptoms.10

If a female DMD carrier becomes pregnant, her baby may have DMD.10

Understand the importance of genetic counselling in DMD Developmental delay in children can be an early sign of DMD.13 Learn more about Duchenne muscular dystrophy symptoms

Understand the key symptoms to be aware of in DMD.

Early diagnosis of DMD is important, find out more on how this is done.

Genetic counselling can help guide you through the genetic testing process in DMD and also offer emotional support.

Everything you need to know about DMD, all in one place.

You are now leaving Duchenne and you, a website provided by PTC Therapeutics. This link will take you to a website to which our Privacy Statement and our Terms and Conditions do not apply.